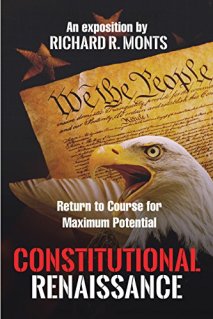 Have you had enough? When will the United States government stop growing? All constitutionally enumerated activities should have been in place long ago. There should be no more expansion in scope, yet there is. What we have now is an overbearing out-of-control central government—expanding far beyond constitutional limits—imposing on member states’ sovereignty. The result is a reduction in competition among states, a stifling business environment, and citizens and businesses suffering under complex taxation and regulations. On top of that, a litigious environment depresses economic activity further. There is an alternative! This book presents one that is very business friendly, establishes competition among the states, and provides a positive environment for the individual to strive for their potential while honoring the genius of the Constitution.

Watching the direction, we are being taken, I have become concerned for the future of this great country.     This concern has prompted me to found the Constitutional Renaissance Institute to promote discussion and  thought on the Constitution and on my suggested alternative to our expanding large central United States government. I know of no other suggestion of an alternative to big central government, we seem to be resigned to the inevitability of it.
To Realize our potential there must be a positive business environment. Without wealth it is very hard to achieve potential. Part of the mission of the Institute will be promoting a mechanism that provides the best environment in the world for business. It is described in more detail in the book Constitutional Renaissance. Regulations, taxation and litigation must be reviewed and modified as indicated to have the best environment for business. This mechanism coordinates economic activities nationally without the involvement of United States government.

United States government is too complicated, too intrusive requiring too much energy to navigate. We need disciplined government that stays within its constitutional role. In short, States take care of their internal affairs and United States government takes care of external affairs. There should be very little overlap, if any. This position is based on the intent of the Constitution. It is not based on what interpretation is in vogue.

Human character has not changed since the writing of the Constitution. Therefore, the Constitution is as valid today as when it was written. It means the same thing now as when written. The Constitution is the legal datum for our country, it does not change with time–unless we change it through amendment process. If the Constitution is interpreted differently over time we will not know where we will end up. It is up to the current stewards as they come and go to be true to it. It is the duty of every generation to hand this country off intact to the next generation. As citizens strive for their potential, building on past generations, the country improves in an endless cycle. There is no need for the various parts of government to change or expand roles.

(The statement above refers to the Congress of the confederate government, but it is applicable to the Congress of the federal government of today too.)
The Institute is not aligned with any political ideology. It is the intent of the Institute to encourage application of libertarian to liberal ideas as is appropriate for the intended task. What is being proposed is to move governance, as much as possible and constitutional, from a nebulous complex central government to as-local-as-is-possible government. Competition improves the breed, this goes for government too. By removing overlaying central government from domestic governance and having the states handle their own domestic issues puts competition in play thus improving governance. This should result in the best environment for both business and for individual citizens.

This country has tremendous potential, if only big intrusive government would get out of the way so it could be realized. Three quarters of the people of this country think we are on the wrong path. The only difference between the two parties is one goes down the left side and the other the right side of the same path. It is still the wrong path. We need to think anew for solutions to an out of control United States government. We are on the wrong path. Now is the time to make corrections and return to course, a course prescribed by the Constitution.

Founding of the Constitutional Renaissance Institute is motivated by the belief that it is individual citizens   realizing as much of their potential as possible that, in the aggregate, makes a great society. Government affects us all, get it right and we all do better, get it wrong and we all suffer. The key to our potential is respecting the Constitution of the United States (“…its only keepers, the people.”–George Washington). We all are in this together, working together we can realize the potential that is in all of us–“We the People of the United States.”

Mr. Monts has been concerned about continued expansion of the United States government since the Kennedy administration. He deferred to others, constitutional and legal experts galore, for the correct interpretation of the Constitution. He assumed they were right. During the Affordable Care Act discussions, he had heard enough. He determined to answer two questions to his own satisfaction. First, what is the role of the United States government? Second, what is the best environment for the individual to realize their own potential? After reading the Constitution and other contemporary writings, using his own common sense, putting intellectual integrity and honesty before ideology, ignoring case law, using correct meanings of critical words, he had his answers. The results are in this book.