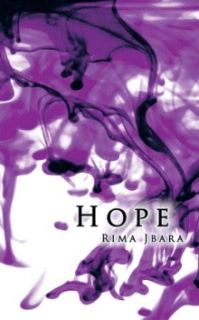 Hope is about a woman who lives in a drowned world and is going through a silent ruin, and finds comfort in believing that her own self exists as another being, and confides her inner most secrets to her. It all started with a dream, advancing to a nightmare that then became a reality. Hope plays a lonely game in silence until her dreams turn to dust. She lives her life through an illusion that ends with capturing her own light, making that moment an unforgettable day. This novel reveals in detail how a woman suffers from depression, and how it rules and guides her life through her journey in finding solace.

Rima Jbara was born on 20th August 1979, in Damas, and spent most of her childhood writing short stories and eventually novels. At the age of 14, she published her first novel and by the time she turned 15, she gave readers her first bestseller. Rima’s zest for writing continued as she released Road To Hell, The Mystique of Asmahan and Shams. It took Rima three years to write Hope, which was called “a masterpiece” by many critics and readers. Through her writing, Rima has fought tradition and reality, and has always chosen daring topics to shock conventional people.